M.D.D first came to Norton College Tewkesbury in September 2019 after not attending  school since December 2017. He was slightly anxious to come and visit but after his tour with mum, was very excited and keen to start. As Headteacher, I was very impressed as M.D.D rang me personally  to see when he could start.

He settled in very quickly and began to make friends. Through interactions with his peers and the staff he became much more settled and looked forward to coming to school, which was very different to his time before he came here. He has continued to blossom as a member of our school community and is very thoughtful of both his peers and the staff. One of the things Max enjoys as well as cooking and playing the drums is playing Uno. Max has established himself as a keen player who can be ruthless in his competitiveness. 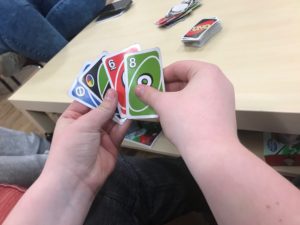 As time has gone on he has become more engaged in his learning and is also attending our farm on a Monday.

His mum has been really pleased and when we spoke to her , she told us that:

“My son has honestly hand on heart never been happier. He has found a special spot where he can be himself and thrive”